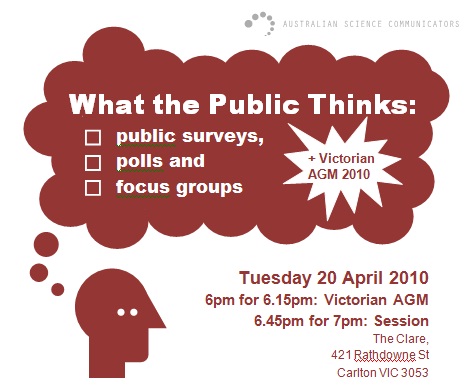 The Victorian branch is due for an annual general meeting to renew and refresh our committee. Please come along and so help to shape the ASC locally. We’d love more passionate communicators to get involved.

The Committee’s main function is organising networking and professional development events for ASC members in Victoria. Often we invite speakers on current issues relating to science communication and it is an opportunity to share our thoughts and experiences in an informal atmosphere. We have had a range of speakers such as Fred Mendelsohn, Director of the Howard Florey Institute talking about the biochemistry of depression; Peter McGauran, the Federal Science Minister at the time; science comedians; science artists; museum exhibitors and more. Recent sessions have included:

part II: Polls and surveys what works?: Finding out what the public really think 6.45pm for 7pm.

Join us for a discussion on public surveys, polls and focus groups.

How easy is it to conduct a survey? What can surveys reveal? And how can we use them to better direct our communication efforts.

Our panel includes a representative of polling company Roy Morgan, who will explain what’s involved in creating and running a poll; and two users – one from state government, one from federal government – who will talk about their experiences in conducting large public surveys, what worked, what didn’t and what people really think about science.

Download the pdf poster for prominent public display at your work place.