Thank you to Linden Ashcroft for the event review.

More than 40 people came along to the Victorian branch of ASC’s ‘ice-breaker’ for what many claim to be the most exciting week of the year! The beer and conversations ran freely between attendees, including representatives from Australian Young Scientists, Knox Innovation Opportunity and Sustainability Centre (KIOSC), Science Teachers Australia, Inspiring Australia, the Environmental Film Festival Melbourne, Scienceworks, The Royal Society of Victoria, Mill Park Library Monash University, Laborastory and many other science–based events and organisations across Melbourne.

Those who were running events during National Science Week were given an opportunity to promote their shows on a timeline posted along the wall of the bar. There was also a chance to spruik events to the crowd in a two-minute lightning talk. Many thanks to those of you who took to the wobbly stool!

A large number of door prizes were even given away. Movie tickets, a night at an observatory, 3D-printed cookie cutters and free passes to National Science Week events were all up for grabs.

Despite the packed house a good time was had by all and it was encouraging to see such an active ASC community alive and well in Melbourne. We look forward to seeing you all at our next event! 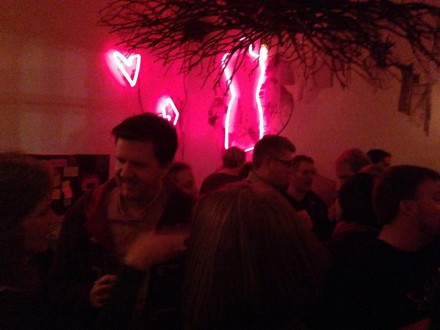