To kick-off the evening, several attendees met at Littlefoot, a conveniently located establishment within stumbling distance of the 100 Story Building. We snacked on edamame and chips, baba ghanoush and a LOT of crumbed cauliflower! Sitting at a round table, we shared our meals and got to both try something new and meet someone new, which was as delicious as it was interesting.

The workshop was facilitated by an old friend of ASC-VIC – the very talented Ben McKenzie. Ben is a comedian by trade which made him well-suited to the relaxed, informal, somewhat adult evening. And by adult, I mean appropriate, scientific content. Ahh biology.

Ben began by showing us around the building. 100 Story Building is a centre for young writers based in Footscray, but where the 100th story is at ground-level and the other 99 levels are below ground. The top-floor/ground-floor room was like a classic primary school classroom/cosy kitchen combo, but with additional plants growing through a trapdoor and partying penguins a couple of floors below. We were an exquisite mix of clientele – a children’s author, children’s educators, people from film and tv, and myriad other communicators with a scientific bent.

Aside from being a comedian, Ben is also a writer (and a fantastic one at that!). So naturally, the first thing he had us do was draw a picture…

We arbitrarily picked a noun to draw and then the person next to us set about trying to guess the noun in some kind of strange hangman/Guess Who game. I would say that we had varying degrees of success but I’m not sure that’s true. I can’t speak for the others, but I know that myself and old friend and former colleague Krys performed particularly badly at both the drawing and the guessing.

Top Storytelling Tip #1: Tell someone your story and get them to tell it back to you – you’ll be able to see what you missed out!

Before we embarrassed ourselves too much, we moved on to something more sci-comm specific. Why do we do it? Science communication, that is. Surprisingly, nobody answered that it was just because they weren’t any good at the guitar or that they knew how to make millions running school incursions. The answers ranged from the simple “I love science” to the more complex and laudable, “To encourage people to invest in science and preserve endangered species”.

The best way to tell a story? In three parts – the beginning, the middle and the end. Seems obvious, doesn’t it. But only once you hear it. That’s what we all went to school for and yet somehow in the last twenty years (obviously only a few years for myself, ahem…) we lost sight of it. Or maybe we just thought that only applied to fiction? So we applied it to our ideas for scientific stories. It works! Totes McGoats.

Top Storytelling Tip #2: The beginning, middle and end of your story do not have to be in chronological order! Oooooh. Messing with our sciencey linear brains!

Our stories by this stage were beginning to take shape! Not a moment too soon, we attempted to identify our audience. Now this for me was the really, really important part of the evening. I mean, I’d been identifying audiences since you were in short pants, but here’s the vital part: Who are they really? They might be 18-30 and live in Footscray, but who are they really? Do they go to the pub at the weekends? Do they think that’s a good idea? Do they put orange juice on their cornflakes? Do they think that’s a good idea?! What are their hopes and dreams, fears and dislikes? Not just a boyfriend and a new car, but their existential crises, their horrible uncle and that thing they do in their sleep that stops them from closing their eyes on planes.

Top Storytelling Tip #3: Describe what your characters are doing instead of using an adjective. Don’t say they are frustrated, tell us they are pacing, sighing, pulling at their clothes…

Most of us had never delved so deeply into the intricate world of science storytelling. For some, our writing had consisted of science with less jargon and shorter words. But now our science shone with the brightness of a narrative, glistened with the journey of a character, and brimmed with the pride of a author that has a beginning, a middle and an end. Our stories will all be better quality than they would have been without Ben’s clever and careful coaching.

The event was funded by an event grant from Australian Science Communicators. ASC-VIC thanks the national body for so generously enabling this event. 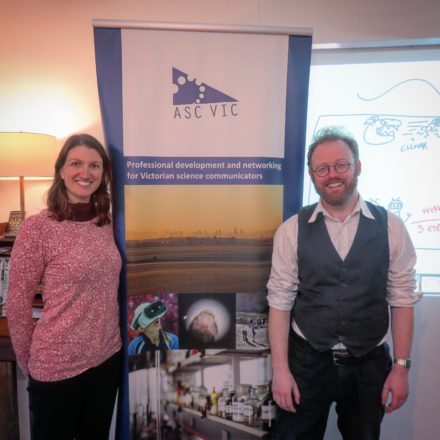