Jesse Shore is passionate about engaging the community with science and in looking for ways to weave together the arts and sciences. He has been developing science based exhibitions and events since 1984, and was President of the Australian Science Communicators from 2010-2012. His business, Prismatic Sciences, produced five travelling exhibitions for the Royal Australian Chemical Institute for the 2011 International Year of Chemistry and he manages the ongoing national tour. He previously worked at the Powerhouse Museum in Sydney as an exhibition project leader and Senior Curator of sciences. While at the museum he was one of the founders of the Ultimo Science Festival, a major National Science Week activity. He is currently collaborating with an artist to create artworks which have a science slant.

The judging panel selected Guy as the standout choice from a number of worthy nominees. The judges mentioned Guy’s many notable achievements and attributes:

The ASC created this award to honour a person or group who exemplify science communication, who have not yet received significant recognition for their contribution to science and its promotion, and for work done in Australia over a considerable or prolonged time.

This is the first time the ASC has made this national award. In the past the ASC acknowledged unsung Australian scientists, but now feel that it is time to put into the spotlight those who communicate the science.

Guy joined the AGM meeting via a video Skype hook-up for the announcement and our accolades. Guy said he was humbled at winning the award. His humility was appropriately accompanied by his ear-to-ear grin. The ASC is in a period of healthy change. An important new step is the previously announced intention that we will seek to have a part-time General Manager to look after a range of externally-directed activities.

The National Executive has been considering how the new appointment will affect the roles and duties of key positions in the Association.

The final contracts for the General manager and Executive Officer will define their positions so that all main players will know their boundaries within our evolving Association.

Just in time for the AGM, the National Executive has written a short duty statement to guide the activities of the new President. The wording of the following brief list of roles and duties is consistent with the Constitution, which only loosely defines the President’s role.

THE ROLE AND DUTIES OF THE ASC PRESIDENT

ScienceRewired was launched at the Science Exchange in Adelaide on 11th October 2012. The Science Exchange was a fantastic venue with great facilities. The building is a beautiful mix of old and new – huge screens in the auditorium (perfect for Skype presentations) and glorious stained glass windows. It was an inspiring place to spend a day in.

As a Science Communicator from the Parenting Research Centre in Melbourne I was looking for interesting examples of science engagement and I wasn’t disappointed.

Highlights included presentations about citizen science platforms such as the Atlas of Living Australia, Skynet and Foldit. I was particularly impressed with the way these organisations encouraged and rewarded participants and communicated results to them. They did this in various ways such as with leader boards, digital trophies and video blogs. In one case some Foldit players who helped to create a novel protein structure were senior authors on a paper in Nature.

Another highlight was hearing about the Serval project from Paul Gardner-Stephen. Paul’s team is working on free open source software that helps mobile phones talk to each other independently, without mobile networks and infrastructure. This has huge implications for disaster relief and remote communities. I found this very interesting as the Parenting Research Centre has projects where we are working with indigenous communities in remote areas.

There are two things that I’d like in a future event;

I am coming to the end of my third one-year term as President. It has been a busy three years and I feel the time is right for someone else to take on the leadership position of the ASC.

The ASC is now busier than ever and the commitments on the President’s time have grown apace as tasks have become more varied and complex. The Executive has recognised this and is seeking to appoint a part-time General Manager to take on many time consuming aspects of the association. This will enable the President to focus on developing policy and to maintain an overview of operations.

I will be stepping into Tim Thwaites shoes as I take over the Past-president’s role. This position was created a few years ago to ensure the continuity of corporate knowledge in the national committees. In this role Tim has contributed, like Jenni Metcalfe before him, to strategic decision making and to helping guide the development of our national conference.

It has been my privilege to serve the ASC for three years as President. I look forward to continued involvement with the ASC in my new role and to helping the new President settle into his/her busy position.

There will be plenty to discuss and decide at the upcoming AGM:

This year’s AGM will be hosted by ASC’s SE-Queensland branch. The AGM will be at the Ship Inn from 6.00-7.15pm. The Ship Inn is at the corner of Stanley & Sidon Streets, Southbank Parklands, Brisbane.

After the business is over David Ellyard will present his highly entertaining and always fiercely competitive science trivia quiz. There will be prizes.

The AGM is for financial members only and the quiz will be open to all.

We will be circulating the AGM minutes and other papers imminently.

During a holiday to the UK and Paris, I couldn’t resist including some science communication experiences among the many leisure activities.

I visited Phil Dooley, former president of the ASC NSW branch and Executive member at his workplace near Oxford. Phil is the News and Education Officer at JET (Joint European Torus), which is the shared fusion experiment run by the European Fusion Development Agreement. Phil is part of the team which communicates to various audiences the research involved in creating fusion events in a plasma.

Among his many duties Phil selects the picture and story of the week for the EFDA website. Phil showed me through the facility and we were able to walk around the world’s largest tokamak as it was shut down for maintenance. My accompanying photo shows Phil dwarfed by the power array which heats the plasma. I contributed to the day by giving a talk to staff about two exhibitions I developed about nuclear science. This provoked a discussion about how to communicate this complex subject to a general public and the relative value of interactive displays. 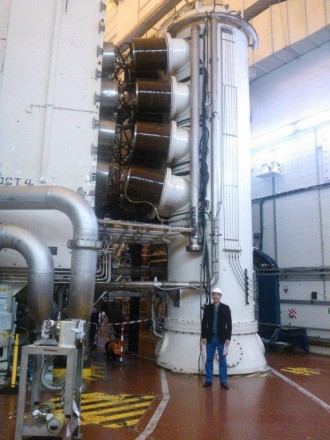 In London I talked with the Roland Jackson, CEO of the British Science Association, about the science communication initiatives of the BSA. We spent much of our time talking about Sciencewise, the UK’s national centre for public dialogue in policy making involving science and technology issues.

I also had a general chat with Karen Bultitude, an Australian who is lecturer in Science Communication and Director of Research in the Department of Science and Technology Studies at the University College London. Karen is a mine of information about the active UK science communication area.

A couple of museum visits were noteworthy. The Wellcome Collection in Euston Road, London, stages artful and intriguing displays and is well worth a visit. Across the Channel in Paris, the Musee des Arts et Metiers features a great collection but displayed with a lack of context and engagement. The main exception is the automatons’ theatre. The charm of these venerable mechanised robotic objects transcends the simplicity of the interpretation. I didn’t stay for the demonstration but I’d expect it would be worth watching even though it’s only in French.

Please spread the news that the National Science Week 2013 grant round has just opened.

Find out more at
http://www.innovation.gov.au/Science/InspiringAustralia/NationalScienceWeekGrants/Pages/default.aspx

ASC is a supporter of sciencerewired. It has a packed all day program with a focus on digital media, http://sciencerewired.org/adelaideprogramme/. With the members’ discount and student scholarships it becomes even more accessible to gain professional development in this rapidly evolving area.

The discount for ASC members to attend the sciencerewired event has been extended. You can register to attend for only $200, more than a 30% discount. Email office@asc.asn.au to get the promotion code. sciencerewired is on 11 October 2012 at the RiAus in Adelaide.

Free student scholarships
There are a couple of free tickets remaining for ASC student members. Email office@asc.asn.au to get the promotion code. Once these are freebies are the cost to students will be $147.50 incl GST, 50% off the full rate.

The discount and student scholarships are for financial ASC members only. A great incentive to renew now if you need to.

This is a reminder that this year’s AGM will be hosted by ASC’s SE-Queensland branch. This is fitting as our next national conference will be in Brisbane in 2014.

The AGM will be at the Ship Inn from 6.00-7.15pm. After the business is over David Ellyard will present his highly entertaining and always fiercely competitive science trivia quiz. There will be prizes. The Ship Inn is at the corner of Stanley & Sidon Streets, Southbank Parklands, Brisbane.

The AGM is for financial members only and the quiz will be open to all.

More information about the AGM in late October.