Thank you to Adam Barclay for sharing his CRCA conference experiences with us!

The 2014 CRC* Association Conference was always going to be interesting, coming off the back of a federal budget that announced $80 million in cuts and the cancellation of the 17th selection round. A back-of-the-envelope estimate for the cost of bidding for a CRC is between $0.5 million and $1 million dollars in cash and in-kind (predominantly staff time). With the original round-17 deadline barely a few weeks after the announcement, several bid consortia were feeling understandably grumpy. Fortunately, existing CRCs were not affected.

Sure enough, the budget cuts dominated conversation despite – or perhaps especially because of – the presence of The Hon Bob Baldwin MP, Parliamentary Secretary to the Minister for Industry, who attended the conference dinner and presented the government’s STAR Award, which recognises CRCs for engagement with small and medium enterprises to drive innovation. (Congratulations to the CRC for Sheep Industry Innovation, which won the STAR Award for work that is helping farmers improve flock management.)

Nevertheless, the budget talk failed to drown out some excellent presentations on the conference theme of Innovating with Asia. Highlights included Dr Thomas Barlow, author of Between the Eagle and the Dragon, who spoke on ‘Global Trends in Innovation – The Shift to the Pacific’, and Peggy Lui, Chairperson of the Joint US–China Collaboration on Clean Energy (JUCCCE), who presented ‘A path forward in the battle for a liveable China’. 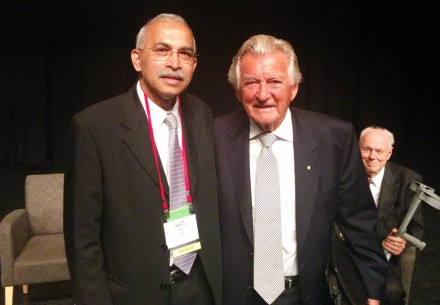 Another obvious highlight was the Ralph Slatyer Address on Science and Society – named after the late former chief scientist who was the chief architect of the CRC Program in the early 1990s. The 2014 speaker was none other than The Hon Bob Hawke AC, former Prime Minister and school friend of Mr Hawke at Perth Modern School. Indeed, it was under Mr Hawke’s leadership that the CRC Program was established.

As well as reflecting on the history and impact of CRCs, Mr Hawke used the address to put forward his controversial assertion that increased uptake of nuclear energy is essential in the face of climate change as a result of greenhouse gas emissions, and the proposal that Australia is the best option for solving the major challenge of a successful nuclear program – the safe storage of spent fuel. Mr Hawke’s full address is available via http://crca.asn.au/.

Also of note, was the respect afforded to Mr Hawke from former political allies, particularly the Hon Tony Staley AO, CRC Association Chairman and former Fraser government minister. Introducing Mr Hawke, Mr Staley reflected that the Liberal Party was thwarted at several elections because the former PM was “too bloody popular”, and that regardless of one’s political stripes, Mr Hawke should be remembered as one of the country’s greatest leaders. In an era of at-all-costs political rancour it was a refreshing reminder that our elected leaders are more human than they sometimes appear.