The smell reaches through the air, sits heavy at the back of my throat. I approach the table and look down at the helpless chunks of pale, rotten flesh. Thicker than jelly. We are to eat this creature—the oldest living vertebrate, one that’s swam blindly in the freezing depths for centuries, devouring seals, polar bears, and countless fish seeking refuge from those parasite-infested eyes. Here I am, a clawless woman in a hot room, about to grind it with my blunt teeth. The shark goes into my mouth and quickly comes back out again.

Eating hákarl (fermented Greenland shark) was one of many new experiences during my time at the Iceland Writers Retreat. I’d seen the Retreat advertised online and fantasised about going. My first trip to Iceland had been in July the previous year, and had left me fascinated with the landscape, culture, and people. Their passion for storytelling, books, writing—and any other creative pursuit—made it seem like a wonderful place to gather writers, to share ideas and generate new ones. But without the help of the Professional Development Grant from the ASC, I wouldn’t seriously have considered travelling from Melbourne to Reykjavík to attend it. I’m so very grateful for the time I was able to spend at the retreat. We each attended five, two-hour workshops run by the featured authors. I took part in: ‘Palm of the hand stories’ with Man Booker Prize shortlisted author Madeleine Thien; one on writing historical novels, with Icelandic author and ex-journalist Vilborg Davíðsdóttir; a session on the technicalities of point of view with Bret Anthony Johnston, author and Director of Creative Writing at Harvard University; a session on finding empathy in your writing on both sides of moral, political and social divides, with Danish journalist and author Carsten Jensen; and one on research for writing by Claudia Casper, who writes science-themed novels.

For a visceral demonstration of the difference good research makes to your writing, Claudia had us first write a paragraph describing eating hákarl (with few Icelanders in the classes, it was unlikely we would have tried it). Then she read us some information about the shark, and asked us to write it again. And then we were told we would actually be eating it, before writing the paragraphs again, to compare with our original versions (during which she gave us Icelandic whisky, I think as a sort of apology).

I also interviewed Claudia and Vilborg about their books and writing approaches, and around the workshops there were shared dinners, author readings, a Q&A panel, sightseeing, blocks of writing time, and a trip to meet the Icelandic President, Guðni Th. Jóhannesson (husband of co-founder of the retreat, Eliza Reid).

The Literary Borgarfjörður day trip involved visits to: Gljúfrasteinn, the home/workplace of Nobel Prize winning author Halldór Laxness, with a reading by author Hallgrímur Helgason; Hvalfjörður Fjord; Hlaðir community centre’s museum dedicated to the ‘Arctic Convoys’ of WWII; Reykholt, home of C13th century writer and chieftain Snorri Sturluson; Hraunfossar and Barnafoss waterfalls; and Deildartunguhver, Europe’s most powerful hot spring, where our guide boiled some eggs in the hot spring for us to eat with rye bread and herring. 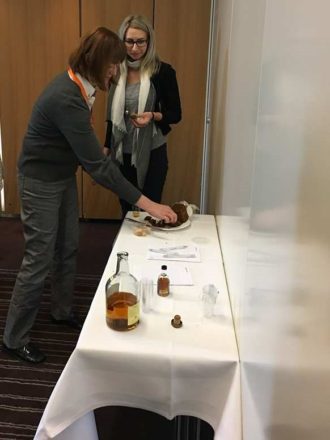 Immediately after the retreat, I felt something like the old emotional intensity following a school camp. Having been thrown together with a bunch of strangers, who opened such intimate parts of their lives in such a short time, was both exhilarating and exhausting. There were days I would sit down next to someone and ask, “what are you working on at the moment?” only to be told “I’m writing about the stabbings I attended as a paramedic,” or “I’m writing about an abusive ex-husband,” or “I’m using cultural research to write about racism and sexuality.”

But far from furthering any stereotypes about depressed writers sitting about in the cold, I felt the retreat created a space where people were comfortable sharing not only their writing and motivations for it, but where they felt supported and welcomed to both ask for, and give, advice based on their own (incredibly varied) writing careers. Conversations circled from personal stories to feedback on the structure or technicalities of a story, on ways to avoid burnout, ways to approach publishers, the best computer programs to use, and everything in between. The featured authors were often part of these informal conversations outside their workshops, and their willingness to share their own struggles and personal successes was a lovely reminder of the fact they work through the same insecurities and challenges as almost everyone else.

It was my first time at a writer’s retreat, and I hope it won’t be the last.