This is the official notice of the Australian Science Communicators’ Annual General Meeting, to be held in Perth, Western Australia, on 30 November 2011. The AGM is being hosted by the ASC WA Branch. The AGM will be followed by an interactive science quiz night hosted by compere extraordinaire David Ellyard.

The ASC AGM will run from 6.00-7:15pm in the Cab Bar and is open to ASC voting members only. The quiz night for all registered participants will begin at 7:30pm sharp in the Cab Bar.

Seats are limited so registration is essential.  The seating is 6 people per table. To confirm the members of your table, please email asc.events.wa@gmail.com.

The AGM is an opportunity for members to hear about the year’s events at the national level, and also to have their say about what should happen in the year to come. It also includes reports from the President and Treasurer, and news of the upcoming national conference. Members also have the chance to elect a new National President. Proposed agenda items, notices of motion and presidential nominations must be received by Wednesday 23 November.

Note that notices of motion require a proposer and a seconder, and nominations for President need to be agreed by the nominee.

Members unable to attend the AGM in person are able to give proxies to other members attending the meeting, or alternatively, send them to Sarah Lau, National Secretary (slau@chemcentre.wa.gov.au) before 5.00pm AWST on Wednesday 30 November 2011.

1. Confirmation of members attending, apologies
2. Notification of proxies
3. Minutes of 2010 AGM
4. President’s report
5. Treasurer’s report
a) presentation of statement of accounts
b) determination of annual membership fee
c) determination of capitation to be returned to branches
d) determination of honoraria
e) appointment of auditor
f)  appointment of public officer
g) preview of 2011 budget
6. Election of 2012 ASC President
7. Motions to amend the Constitution
8. Any other business

Motion to change the ASC Constitution – for ASC AGM 2011

1. Motion to change the Constitution – Motion made by Jesse Shore and seconded by Rob Morrison. We propose the constitution is amended as follows:

[The proposed change to the wording in the revised clause is underlined.] [Definition from clause 2.9: “Association” means Australian Science Communicators Incorporated.]

Section 5.4 of the constitution – ‘BRANCHES’

Reason for proposed amendment:
This minor change in wording acknowledges that the ASC branches, which are unincorporated bodies, are more likely to have their own rules than constitutions.
We want the branches to be aware they have the right to have rules and to encourage them to adopt rules if they haven’t done so already. The new wording still allows for branches to have constitutions and makes it clear that whether they have rules or constitutions, the Constitution of the Association is the overriding document.

Apologies for the short notice. Please register your attendance at http://ascwamuseum.eventbrite.com/

The Australian Science Communicators WA Branch and the Western Australian Museum would like to invite you to a tour of WA Museum Collection and Resource Centre at Welshpool.

The event will include an overview of the WA Museum and its science program by Di Jones, Executive Director, Collections and Research.

Participants will then go on a tour of the Collection and Resource Centre (CRC) with Mark Harvey (Head of Terrestrial Zoology), Alex Bevan (Head of Earth & Planetary Sciences) and Jane Fromont (Head of Aquatic Zoology).

This will be followed by refreshments and networking.

Upon arriving, Wayne and Education Officer Claire Gaskin guided ASC members through an African Painted Dog scenario, in which two teams were required to navigate their way across a grid whilst avoiding some of the dangers the dogs face in real life.

This first activity was an engaging introduction to communication and education at Perth Zoo, in which a range of tools and approaches are used to encourage visitors to connect with animal ‘ambassadors’.

From a science communication perspective, Perth Zoo not only works to raise awareness of issues such as conservation and sustainability, but also encourages visitors to change their own daily behaviour to address these issues. Often these actions are simple, but can conflict with existing attitudes. To illustrate these concepts in action, Wayne
explained one of the Zoo’s current campaigns – encouraging people to choose recycled toilet paper.

The group was then immersed in a selection of the Education Team’s ‘educational experiences’, which are designed to allow hands-on experiences around the Zoo’s own programs and operations. For example, one group of ASCers was put to work solving the problem of finding enough termites to feed the Zoo’s numbats.

It was an entertaining and engaging showcase of the many educational programs offered at the Zoo. However, the final part of the visit was the most special, in which Wayne led the party through the Zoo’s African Safari section after dark.

Many of the animals viewed were particularly active and ASCers were fortunate enough to witness the Southern White Rhinoceroses from less than a metre away, and to hear the lions ‘singing’.

ASC-WA must thank WA Secretary, Miriam Sullivan for organising the visit and Claire Gaskin from Perth Zoo for assisting with the educational activities. A special thanks to Wayne Walters for organising an excellent program and sharing Perth Zoo’s approach to communication and education. 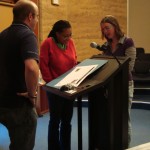 This week we have two students, Sunita Pradhan and Andrew Mills, who will be presenting a summary based on a detailed literature reviews completed for the unit COMM7402 Specialist Research Topics.

Sunita has been teaching high school science and maths for about 5 years, before coming to Perth to do a Masters of Science Communication and Education.  Her talk is entitled: ‘The Role of Excursion in School Science’.

Sunita will be talking about what formal and informal learning is and how  informal learning from excursions help students in learning science.  She has looked at how the excursion helps in the progress in students’ learning,
attitudes towards science learning and social outcomes, and the teacher’s role in facilitating learning outside the school and what are the constraints faced while implementing this.

Andrew Mills will be taking a detailed look at the communication between GPs and Alternative Medicine Specialists. Specifically the values and attitudes of GPs (General Practitioners), Complementary Medicine Therapists and
patients and the impacts of acceptance of complementary and alternative  medicine.

WHERE: The University of Western Australia, Crawley campus Centre for Learning Technology; Ground floor Physics building, near Fairway entrance #1. Enter via ramp between Physics and Geology, go down stairs to basement.

The schedule of upcoming seminars and events can also be found on the UWA Science Communication blog: http://uwasciencecomm.blogspot.com

The University of Western Australia UWA has been offering science communication qualifications since 2002.

Most courses can be undertaken in a flexible part time format to fit around work or other commitments. Students may enrol in the following programs:

Undergraduate Bachelor of Science (with a major in Science Communication)

Master of Science Communication and Education (Graduates are qualified to teach science in high school or work in any science-related organisation that has an education mandate. People who have completed a Graduate Diploma of Education or equivalent can apply for up to one year of credit towards this degree.)

Master of Science Communication (by research and coursework)