Getting the Message Across 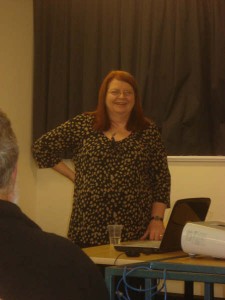 Carol Oliver enjoying a finely made point during the workshop discussion

How effective is science education within Australia? Dr Carol Oliver, from the Australian Centre for Astrobiology, said this will be an open question until adequate research is done into the subject. Carol emphasised the importance of understanding one’s audience in communicating knowledge effectively yet highlighted the lack of evidence that audiences are taking away the intended messages.

“How is it that the Australian Government can spend millions of dollars on science education when they do not even know what the outcome is?” she said. Longitudinal studies have demonstrated that by the time children get to high school, much of the scientific information that they have learnt in their primary years has since been forgotten.

In Australian universities, a substantial proportion of science students did not do science in Years 11 and 12. It appears that many are opting to get into university with a low UAI by choosing a science degree, and this could be lowering the quality of science students. With the Australian adult scientific literacy rate being approximately 15% (figure derived from a pilot study by Dr Oliver), our democracy is facing less informed decision making for an increasing number of science related issues. Perhaps a key to developing a more scientifically informed electorate is for science educators to make far greater use of changing modes of communication.

In America, more than half of the audience in search of scientific information look towards the Internet. In Australia, 92% of the population use Google as their search engine, and as of December, 2008, one fifth of Australians over 18 used Facebook. “This certainly says something about where to aim information, as well as where to gain feedback from the audience on the impact of such information,” Dr Oliver said. 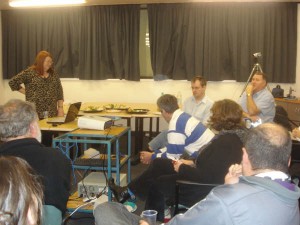 Question time during the workshop

However, numerous questions remain. To encourage general public interest in science is it more effective to promote information from science experts or provide access to a less expert but more populist knowledge source? And should scientific information be aimed at all of the population or only those who are interested? If the Australian Government undertook research into the effectiveness of scientific education, then maybe we would know.