Canberra’s scientific and research community came out from their labs and offices to the CSIRO Discovery Centre on the 18th of March to discuss the ‘hot topic’ of whether it is possible to have a long term and sustainable career in research. Hosted by the ACT Branch of the ASC and in conjunction with Inspiring Australia an audience of over 100 attended this recorded-for-radio discussion which posed the question ‘Is Australia producing too many PhDs?’

This panel discussion came about after the Department of Industry, Innovation, Science, Research and Tertiary Education commissioned the Australian Council of Learned Academies to investigate the career pathway for researchers in Australia. Science communication consultant and well known ASC member Toss Gascoigne conducted the survey and drafted the report entitled ‘Career support for researchers: Understanding needs and developing a best practice approach.’ The report highlighted job insecurity as the number one problem facing Australian researchers.

This led to the idea of running a panel discussion (including both early career and prominent researchers) about the issues relating to life after completing a PhD. It wasn’t surprising that a large majority of the audience was in fact made up of current postgraduate students, with Canberra being a major Australian university city.

The discussion started with moderator and ABC Radio National Big Ideas host Paul Barclay telling the audience that Australia is currently producing over 7000 PhD graduates annually, nearly twice as many as only a decade ago.  This led towards discussions about the sustainability of the system and where all these graduates go once they graduate, particularly those with a specialised area of expertise.

While it could be argued that many students undertake a PhD in the hope they become full-time lecturers, professors and/or researchers. Aidan Byrne did suggest that a PhD is not just about vocational training for academia.  It also teaches skills such as project management, communication and team work, which can also open up positions in policy development with government agencies or industry sectors once they graduate.

So the problem isn’t that lots of PhD graduates are unemployed and ‘left on the streets’ but that only 1 in 8 graduates actually get the research job they want post PhD.  So there are currently too many PhD graduates produced for the number of jobs available in the research world. Those that do move into research, such as recently submitted PhD panelist Emily, who now works as a post doc with the CSIRO Division of Plant Industry, pointed out that you are generally only employed on an 18-24 month contract. Emily went on to say she personally was fine with this for the time being but posed the question, what about those with families? Or who want to settle down, buy a house and have stability in their life? Short term and erratic contracts are not ideal plus the fact that producing high class research in a limited amount of time – and possibly a new environment – is always challenging.

While Aidan Byrne did point out that grant funding as well the number of jobs in research have increased over time in Australia, it is not at the same rate as the production of graduates. There is a risk that even those who enter the academic/research world immediately post PhD may burn out within the first 10 years due to the heavy workload and pressure to continually fight for grants and positions. Almost 90% of researchers who complete a PhD are not even in an academic field after this time. Toss stated that while there was a lot of feedback into how the system can be improved, most scientists and researchers did love their jobs.  It was the competition for grants and short term contracts (essentially the instability of it) which made scientists angry about the whole system.

Having Aidan Byrne on the panel did put the ARC granting body under the spotlight. Some audience members stated how it costs a significant amount of money to write an ‘unsuccessful’ grant application and in some cases up to 4-6 weeks of an academic’s time, when they could be doing better things. Another notable audience member, Nobel Laureate Brian Schmidt (pictured in foreground) wondered aloud if researchers need to go through the rigorous grant application process each year, once they have proven themselves as a competent researcher.  Should there be different processes required for early career and high profile researchers, he asked.

Another topic was about those who leave the research world but want to return. For example ‘women in science’ who leave to start a family are said to have less of a chance in being successfully re-employed due to challenges of wanting to go part time or not being able to keep up their publication records and skill set when away for an extended period of time. Moreover, it seems that even to this day there is still an issue with males getting paid more than females.

So how do we fix it? Well, it is definitely not an easily solved problem and views are mixed as to how to do so. However most agreed that longer term contracts, more chances for early career researchers to obtain grants and better feedback on why they don’t/can’t receive one in the first place, is a good starting point. Obviously more government funding will be required if the number of PhD graduates continue to increase or the PhD program will need significant changes in order to better prepare PhDs for jobs in industry and the government rather than academia or research.

While this 60 minute panel discussion was a great eye opener, there was obviously lots more discussed than this short article can cover. To find out more check out Twitter #ausphd for some of the more notable comments and listen to the edited panel discussion on the ABC Radio Big Ideas program, Podcast available for download on their website. 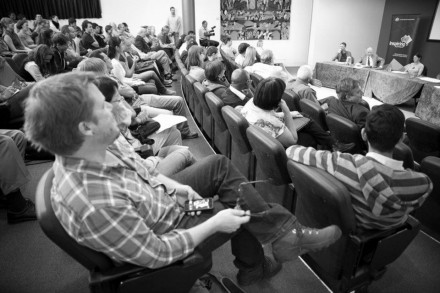 We would also like to thank the ASC executive committee (and Rod Lamberts – pictured front of photo tweeting avidly at the event) for allocating funds to our branch to help run the event. This was very much appreciated. More photos taken by our Digital Media Officer David Wong can be seen on our Facebook page.