ASC-WA held an ASC members-only, free masterclass in the lead up for National Science Week. This masterclass explored case studies, group discussions and handy hints for members to get the most out of their booth and informal engagement strategies in the lead up to and during events like Perth Science Festival.

I’m happy to report a valuable session we had on the 27th of July and we’re keen to share the resources for those who could not attend or live stream in.
Attached are the presentations, reports and notes from discussions that explored case studies and handy hints for science communicators to get the most out of your booth and informal engagement strategies in the lead up to and during events for National Science Week (and beyond!).

A huge thank you to our presenters who gave up their time and expertise during this busy period, and our WA members in attendance. It was lovely to catch up over a glass of wine and cheese as always!

We wish you all the very best for this exciting time, and look forward to crossing paths with the plethora of phenomenal WA events.

Thanks to George Aranda for the event review!

“I had the good fortune of being part of a special edition of “The Laborastory” for National Science Week. The organisers of this local monthly staple of science storytelling stepped up and convened the event at St Michael’s Uniting Church in Melbourne’s CBD. Some 600 people turned up on the wintery evening to listen to science communicators such as myself, Chris Lassig, Katie Mack, Clare Hampson, and Teresa MacDonald. We talked about some of our favourite scientists in front of the church’s massive pipe organ, with projection artwork and a science choir (The Gaussian Ensemble). Great to be part of such a creative night of science communication, which was recorded, and the audio can be found at http://thelaborastory.com and video on Youtube.” 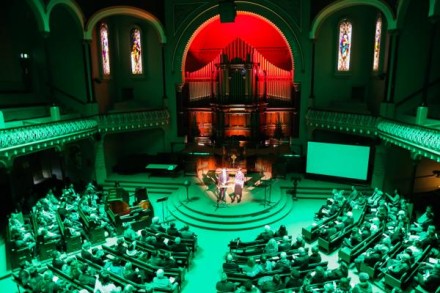 The Laborastroy, at St Michael’s Uniting Church in Melbourne’s CBD. Some 600 people attended the event.

Organisations involved in food production, processing, distribution and policy face considerable challenges and opportunities as a result of a range of forces, including globalisation of food systems, growing consumer expectations, economic growth and demographic shifts (particularly in developing countries) environmental issues including climate change, and the growth of chronic diet and nutrition-related diseases.

In response, an interdisciplinary research group at the University of Adelaide is working to develop new research projects in the area of ‘Making ‘good’ food: interdisciplinary approaches to understanding food values and policy’.

National Science Week provided the perfect opportunity for the team to explore how people make decisions about novel foods that have scientific, social, environmental and economic dimensions. The team’s successful bid for funding with an SA Community grant in conjunction with National Science Week allowed them to hold an event “Served with a Sprinkling of Science” What would you put on your plate at which they could collect data, in real time, from the audience using the KeepPad™.

Speakers for the event were each allocated a topic:

for which they discussed cutting-edge food research currently underway from scientists and other experts.

By allowing the audience to participate directly in the event, the team gained valuable insights into how the audience make decisions about novel foods that have scientific, social, environmental and economic dimensions.

Event organiser Heather Bray said, “We wanted to do two things. We wanted to find out what people think about food made with science, as well as finding out if events like this can engage people in the issues.”

The event was a great success, with the organising team gathering a number of novel and significant data sets which they are hoping to publish – keep your eyes peeled for that in the near future.

‘Served with a Sprinkling of Science’ was also showcased recently at the joint meeting of the History of Science Society and the Philosophers of Science Association in Chicago, USA, as an example social engagement.

Organisers would like to thank ASC President Joan Leach for the brilliant job she did hosting and facilitating the event – her contribution meant that they could sit back a little and monitor how things were going, a key factor in the events huge success!

Join palaeontologist and educator Scott Sampson for a guided tour of Cretaceous West America. 100 million years ago it became an island. On this diminutive landmass a spectacular array of giant dinosaurs evolved: from horned, duck-billed, and armoured plant-eaters to meat-eating tyrannosaurs and smaller “raptor-like” predators.

Scott is a Canadian palaeontologist who has a dual position at the University of Utah as Research Curator at the Utah Museum of Natural History and Research Associate Professor in the Department of Geology and Geophysics.

Sampson has recently shifted his focus towards science education and is arguing for radical changes in education as a key factor in resolving the current sustainability crisis.