Thanks to George Aranda for the story behind the new ASC shop!

In October the ASC-Victoria organised an event for The Martian. To celebrate this event I asked James Hutson how he felt about putting together a t-shirt, around the great line in the film “I’m going to have to SCIENCE the shit out of this.” Unbeknownst to me, James had been involved in discussions with a previous incarnation of the ASC exec years ago, about the idea of putting together an online shop with all sorts of ASC merchandise. Chatting to the current ASC executive, they were all very keen to revisit the idea of an ASC shop, and the feedback from the ASC community on Facebook has been great. There have been a handful of sales, include several requests to increase or reduce the level of swearing on this first t-shirt.
Hopefully we can come up with more ideas for t-shirts and other items that can fill the ASC shop! 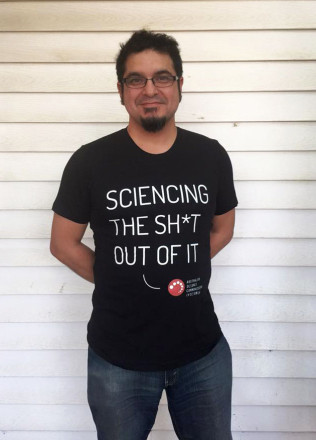 George Aranda wearing a T-shirt from the ASC online shop