Trust Me, I’m a Science Communicator.

With thanks to Dr Craig Cormick, President, Australian Science Communicators

Let’s start with a quick poll. Who do you think people trust the most?

According to a poll conducted by Roy Morgan, nurses topped the trust charts for the 22nd year in a row as the most trusted profession. And they were followed closely by pharmacists, doctors, engineers and school teachers. Bottom of the list were those working in car sales, advertising and real estate agents.

Scientists as such weren’t even thought of to be included on the list as a profession worth asking about!

A US poll conducted by Gallup in 2018 also rated nurses as the most-trusted profession. They were followed by military officers and teachers. Medical doctors and pharmacists rated a bit lower. 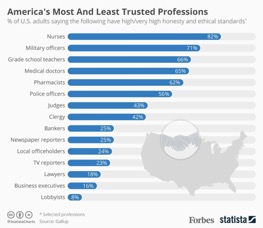 We all know celebrities hold a level of trust way above their qualifications, on all kinds of topics – but just how much are they actually trusted? A study by the Korn Group found that in Australia, the most trusted celebrities are Hugh Jackman, Jamie Oliver and Ellen Degeneres. At least there were no wacky foodies on the list, or crazy health faddists, sprouting paleo diets and vaginal steam baths.

So what about those polls that did look at trust in scientists?

And an Australian National University poll, conducted in 2014, found that 71 per cent of respondents trusted scientists (much more than they trusted the politicians responsible for science, at 15%).

In Britain a poll conducted by Ipsos-Mori in 2017 found that 83% of the public thought that scientists were trustworthy (though again nurses topped the poll with 91% trust).

And in the USA a 2016 survey by the National Science Foundation found that more respondents expressed “a great deal” of confidence in science leaders than in leaders of any other institution except the military.

But  not all US polls were so glowing – another conducted by GSS over several decades found only about 4 in ten people had a great deal of confidence in scientists (though they were the only group amongst 13 whose confidence rating remained stable, which might be some consolation).

So trust in scientists isn’t actually too bad – but why then do many people not much trust science? That’s an altogether more interesting question to ask, and several researchers have looked at it in detail.

A report by Pew stated, “Overall, many people hold skeptical views of climate scientists and GM food scientists; a larger share express trust in medical scientists, but there, too, many express what survey analysts call a “soft” positive rather than a strongly positive view.”

In the USA at least, many people are either skeptical about scientists’ level of understanding of contentious issues, or think scientist disagree on them. 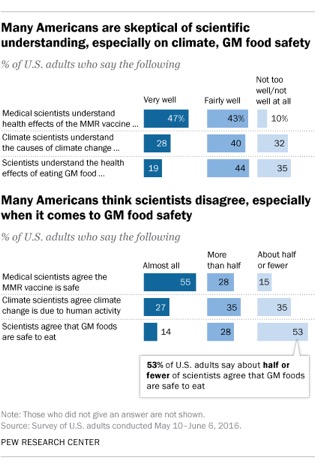 So what’s to be done to stop trust being eroded?  The answer according to many researchers is in better engagement on science. Put simply. Build a relationship between scientists and the public.

And that’s the role of science communicators.

Trust me on this. I’m a science communicator!