The Victorian branch of Australian Science Communicators recently enjoyed an evening of documentary film and science with a screening of “The Desperate Plight of the Orange-bellied Parrot” followed by a Q&A session.

Members and guests filled the LongPlay cinema in North Fitzroy for pre-film dinner and drinks in the cinema bar. After a short introduction of special guests, filmmaker David Neilson and conservation biologist Dr. Michael Magrath, viewers settled in for the film.

The Desperate Plight of the Orange-bellied Parrot is an intimate, sometimes comical, sometimes touching insight to the lives of these small, charismatic birds. The film spans the migration of the birds from the Tasmania wilderness to the Victorian coast. Shots of the parrot’s food plants and their wild, unforgiving habitat stirred sympathy for the vulnerable birds whose bright colours and cheery personalities belie their endangerment.

A bevy of threats are faced by the Orange-bellied Parrots, including the usual suspects of climate change and habitat destruction, but their story is also one of hope. Their story is one of dedicated scientists, volunteers and community. A story that pits the desires of the public to save the parrots against the legislation of the government. Interviews with the conservationists, including volunteer Bob Brown and project scientists, speak of a species on the brink with some stories of hope and indications of potential for recovery.

The Orange-bellied Parrot breeds well in captivity and several sites including Moonlit and Werribee Zoo feature in the film. Many branch members have visited the parrots in their sanctuary homes, but not before been privy to the scale of the work behind the scenes.

David Neilson said that ironically it is the very endangered status that made the footage of the birds so intimate, accessible and personable. They live in close quarters to human caretakers and their movements are monitored and recorded.

The screening was followed by a Q&A session with David Neilson and Michael Magrath, hosted by ASC-VIC president Lynette Plenderleith and the audience posed questions about the genetics of the birds, the migration routes and their celebrity status. David gave us the inside story of the birds and spoke of his inspiring passion for protecting them through documentary. Michael answered the audience’s questions about the techniques used to conserve them and the prognosis for the survival of the species, the answer to which will remain unknown for now, but all in the room were hopeful.

The event was funded by an event grant from Australian Science Communicators. ASC-VIC thanks the national body for enabling the event through its generosity. 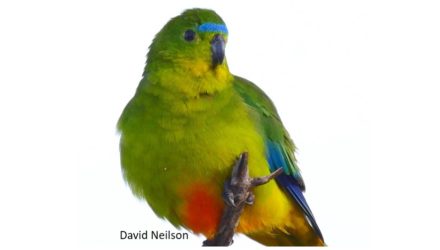