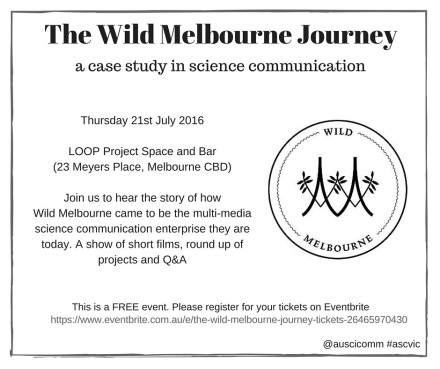 This is a FREE event but places are limited so register your attendance here and stay tuned for updates at the Facebook even page here.

·         Have you ever wondered what goes on behind the scenes in a newsroom?

·         What turns science into news for them and their audiences

·         How you can help them engage their audience and stay true to the science.

Then you can turn the tables and ask them your questions.

This event is FREE, but you’ll need to reserve your place via Eventbrite.
When: Monday 27 June – nibbles and networking from 6pm, forum to start at 6.30pm

As science communicators, when we write about scientific discoveries for public consumption, we often search for the ‘so what?’ in the story – what are the implications for human kind and how will this discovery improve our lives for the better? But for discoveries in pure mathematics, there is often no application at all. Or at least an application may not be known right away.

This month, ASC Victoria continued its series of science movie nights in Melbourne with the screening of ‘The Man Who Knew Infinity’ – a bio pic based on the short but incredible life of self-educated genius mathematician Srinivasa Ramanujan (1887- 1920).  It’s a story that explores the art and divinity of pure mathematics, as well as Ramanujan’s own struggle against British superiority and the rules of ‘empiricism’ or having to prove his mathematical theorems.

Dr Kevin Ormann-Rossiter – physicist, science historian and writer – primed us before the screening, giving some insights into Ramanujan’s world.  Ramanujan, he explained, was revolutionary not only for his mathematical discoveries but because he led the way for Indian academics to travel to England for study and to gain recognition on the world-stage. Much of what’s  known about Ramanujan’s journey from clerk in Madras to fellow of both Trinity College, Cambridge and The Royal Society, is through the accounts of Cambridge Mathematician GH Hardy – the man who brought Ramanujan to Cambridge, helped publish his work, and formed with him a kind of  ‘odd couple’ partnership.  Spoiler alert though:  Ramanujan’s life was cut unfortunately short when he succumbed to illness at only 32.

As someone who’s never been gifted in mathematics, I’m fascinated and awed by people with mathematical minds. The first time I ever heard about Ramanujan was actually via The Simpsons. At Simon Singh’s public lecture in Melbourne a few years ago ‘The Simpsons and Their Mathematical Secrets’, Singh talked about the number 1729 and why it is slipped into the odd Simpsons episode by the show’s writers. It’s called the Hardy–Ramanujan number and the story behind it gives a small but compelling insight into the brilliance of Ramanujan’s mind. Hardy one recounted a visit to Ramanujan in a nursing home:

‘I remember once going to see him when he was lying ill at Putney. I had ridden in taxi cab number 1729 and remarked that the number seemed to me rather a dull one and that I hoped it was not an unfavourable omen. ‘No,’ he replied. ‘It is a very interesting number. It is the smallest number expressible as the sum of two cubes in two different ways.’

It’s a key scene featured in the film that fans will likely anticipate.

For mathematicians and math fans such as those behind the Simpsons, using the number 1729 is a silent homage to Ramanujan and a symbol of love for his work. But for the rest of us, The Man Who Knew Infinity offers an accessible inroad through which we can gain a greater appreciation for the beauty of pure mathematics and the freakishly talented humans who are able to play with it. Looking forward to seeing you all there.