Michelle Wheeler is a former science and environment reporter for The West Australian newspaper and has been published in The Age, The Sydney Morning Herald, ABC Science, the Countryman, WA Today, suburban newspapers and more. She is currently a full-time freelance journalist, writing for both science publications and the mainstream media, and helps science organisations communicate their research to the world. Michelle’s work has seen her drive to the remote Square Kilometre Array site in a 2WD Hyundai, stand on a boat following a white shark attack to check shark receivers are working and spend a day on a tiger snake-infested island dubbed the most dangerous in the world. She has been in a boat crash while meeting isolated tribes in the Malaysian jungle and has interviewed Nobel Laureates, Buzz Aldrin, Richard Branson and Ewan McGregor. Michelle previously worked in science communication at Scitech and The University of Western Australia. She has a Bachelor of Science and Postgraduate Diploma of Journalism. Digital photography and solar prints of leaves and other found objects are just some of the ways community participation is being encouraged through storytelling technology. 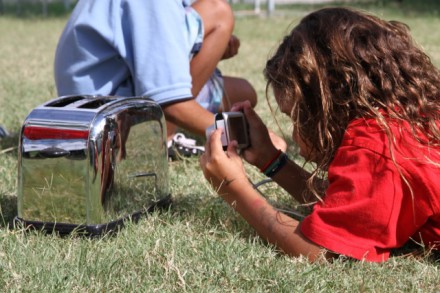 Creative photography at the Wings Drop-in Centre in Wilcannia

Young people are telling stories about themselves and their environment at science and art workshops in the New South Wales towns of Wilcannia and Wagga Wagga.

They’re part of the dLab National Program, started by dLux Media Arts as a way to help regional youth contribute to their communities and shape their own future.

Using everything from digital photography to solar prints of leaves and other found objects, Wilcannia students captured elements of their hometown, learning along the way about local botany but also the chemistry of photography and the physics of light.

“We had a real ‘wow’ moment when we turned the whole room into a camera obscura and projected what we could see outside onto the walls and roof inside the room,” said workshop facilitator Yenny Huber.

Students’ stories and photographs went into a mobile app, an interactive map of Wilcannia with tours of places of personal importance to them.

In Wagga Wagga, the students’ work was projected onto the walls of the Civic Centre, alongside local music and interviews in an exhibition at the Ashmont Artspace.

“As much as the students enjoy learning about the science, the real power in this program is how they use technology to express themselves by creating art and audio-visual content,” Yenny said.

The dLab National Program continues in 2014, with a special guest appearance by Indonesian artist Andreas Siagian, who will run workshops on computer technology and electronics and will teach people how to make a DIY digital microscope from a webcam.

Find out more at http://www.dlux.org.au/cms/dLab/dlab-national-program.html.

How training ten locals is set to unearth tourism potential and take science to thousands. 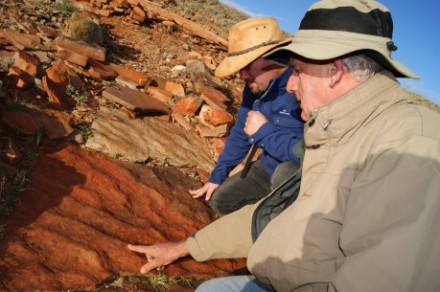 The ‘Hidden National Treasure’ project is turning Flinders locals into science communicators and working with them to develop Ediacara fossil tourism ‘experiences’.

Fossils from the Ediacaran Period have lain hidden like buried treasure for 550 million years under the ancient sea floors of outback Flinders Ranges.

This project has trained ten locals in palaeontology and communication, allowing science engagement to infiltrate into local tourism activities.

Project manager Damia Ettakadoumi of Straight Up Science says the project capitalises on the passion and enthusiasm the people who live in the region have for the fossils. It also takes advantage of the fact that many already offer guided tours of their properties, nearby gorges and geological formations.

“Embedding science stories in other experiences is another way of getting science out into the community,” says Damia. “The locals were looking for this opportunity. They have both the passion and the means to pass it on. By teaching these few, we can potentially reach thousands of tourists.”

The beauty of the project is its ability to reach ‘beyond the converted’. Breath-taking scenery, wildlife, bushwalking tracks and the landscape paintings of Hans Heysen attract a wide range of visitors to the region – people who might not otherwise engage with science.

“The people living up there running cattle stations and tour operations are not geologists, botanists or palaeontologists, but they’re very hungry for information about these topics and Indigenous knowledge because they love it! They want to talk about it!”

Ten locals have received Certificate III training and an intensive course in Ediacara palaeontology and geology. They can now confidently explain the Ediacara story to tourists. 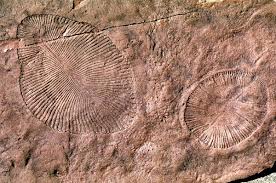 Dickinsonia – an iconic fossil of the Ediacaran biota

Damia and her colleagues are now working with the Flinders locals on the next stage of the project: developing tourism experiences and resources, such as formalised fossil tour routes, brochures and tourism apps. They will also develop an Ediacara brand to help promote Flinders fossil finding adventures internationally.

The Flinders Ranges is one of 16 regions chosen for the Australia’s National Landscapes program, a tourism development and conservation partnership managed by Tourism Australia and Parks Australia. Other regions include the Australian Alps, the Great Barrier Reef and Ningaloo-Shark Bay.

The Hidden National Treasure project injects science education into this tourism development, with outcomes that will be great for both public education and the local economy.

WA’s Inspiring Australia officer shares what inspires her, advice for science communicators and why she sent a scientist travelling the State in a white campervan with 18 replica skulls. 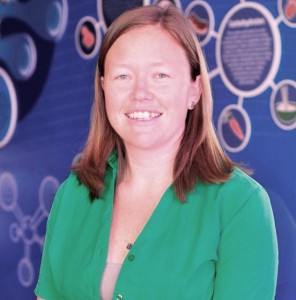 A love of meeting people from different backgrounds and a bug for travel are surely essential requirements for Kerry Mazzotti’s challenge of coordinating science engagement across the biggest state in Australia.

Kerry is one of eight state and territory Inspiring Australia Officers who support science communication and engagement projects, help them gain publicity and enable local collaboration.

What is your background?

I did my undergraduate degree in Environmental Science. I realised pretty quickly that I was more interested in talking about research than conducting it so went on to be a Science Circus Scholar in the Questacon Science Circus. After completing a Graduate Diploma in Science Communication as part of that course, I stayed on with the Questacon Outreach team for another couple of years presenting their careers program to high school students right across the country, from Nhulunbuy to Nannup and Rockhampton to Renmark.

With a full blown case of the travel bug, I set off for North America and landed a position in the Community Engagement team at Science World in Vancouver, once again travelling to regional areas across the province to enthuse people about science, this time with the Scientists in Schools program.

With a few detours and pit-stops along the way, I am now based at Scitech in Perth, still focussed on community science engagement including National Science Week and the Inspiring Australia Initiative.

What was your first job?

I am continually inspired by nature, and the scientists that study it. Nature was the reason I got into science in the first place, and I believe this is the gateway for many people. Science is about asking how the world works, and before you start asking the bigger questions, you start by asking questions inspired by nature like ‘Why does it smell nice after it rains?’ ‘Why are the sky and ocean blue?’ ‘Why do all of these animals only come out at night?’ And suddenly, before you know, you are a science enthusiast.

What Inspiring Australia initiatives are happening in your area?

In WA, Inspiring Australia supports Regional Community Science Engagement Groups in 6 regional hubs across the state, including Broome, Geraldton, Bunbury, Albany, Esperance and Kalgoorlie, with key individuals and organisations being supported in Karratha.

In this way, a year round calendar of science engagement events, relevant to local communities, is being developed. Examples include the Esperance Science Engagement Group recently running an event based on the science of brewing beer in a local cafe, and a presentation by an archaeologist at Karratha Public Library. These events are put on by the community and for the community, making them popular and relevant. For more examples of past events see www.snwa.net.au/-events.html.

Is there a success story or two that stand out?

Inspiring Australia in WA supported facial anthropologist Dr Susan Hayes to travel the state and share her passion for forensics and anthropology.

Dr Hayes loaded up 18 replica skulls into her white campervan and headed north. While on the road she gave free public talks in libraries, community centres, schools and caravan parks, based on both the forensic and anthropological sides of her work.

She also ran drawing and clay modelling workshops inviting participants into the world of facial approximation.

As well as encouraging our regional science engagement groups to run their own events on the ground, it’s great to be able to link them up with travelling experts such as Dr Susan Hayes. It provides the groups with an extra resource, and also provides the expert with networks in the regional centres. We have also done a similar thing with innovation guru, Dr Ed Sobey, and Whale Shark conservation and education group ECOCEAN.

This one really stands out because Dr Hayes is an inspirational scientist and researcher but also passionate about sharing her science with others. Luckily for us, she is also a keen traveller!

What are the science strengths of your state or territory?

WA is strong across many fields. One example includes astronomy, with our involvement in the Square Kilometre Array, a mega science project aiming to build the world’s largest and most sensitive radio telescope.

Tell us about your favourite science-related TV show or movie

What are you currently reading?

I just finished a novel called Feed, by M.T. Anderson describing a future where we all have implants to connect us to a Facebook like program that connects us, through status updates and advertising, to the world around us. I love science fiction when it looks at the social implications of advances in technology.

What is the best thing about your job?

The best thing about my job is getting to interact with people from a broad cross section of the community with one thing in common, an interest in science. Whether it be a keen librarian interested in astronomy, an enthusiastic school teacher fascinated by physics or an eager community volunteer who is a budding botanist, my favourite thing is to help them share their passion with others. Curiosity is contagious!

If you could give science communicators one piece of advice, what would it be?

Talk to the people around you. While science communication is a relatively new field, there are still so many resources and so much experience out there for you to tap into. That way you can expend your energy on new and creative ways to engage people in science, rather than re-inventing the wheel.

Read more Questions and Answers with Kerry at the Inspiring Australia website.