ASC Canberra’s COVID-19 response is aimed at supporting and growing our community of science communicators. We want to help people who want to be members of our organisation, as many look towards rebuilding in 2022 following the disruption of the 2020-21 pandemic.

ASC Canberra would like to offer six people financial support to join or continue their membership with the Australian Science Communicators for the 2022 calendar year, funded by the ACT Branch of ASC. These supported memberships will fall into three categories:

The six successful applicants will receive paid membership to ASC for one year, funded by the ACT Branch. Recipients will be invited to engage with ASC’s branch committee to offer input into the branch’s direction for 2022.

To apply for this opportunity, respond by 5 pm AEDT, Friday 12 November to the question “what are you most looking forward to achieving as a science communicator in 2022 and how will this membership help?” Responses should be less than 200 words, and should speak to either your personal ambitions for 2022, or how you would like to engage with the ASC ACT community during the new year.

As well as welcoming existing members of ASC’s community, we encourage newcomers who have not previously been a part of ASC to apply for this opportunity.

Apply via this form: https://forms.gle/pXyWzamyMPnoByX47

The recipients of these six paid memberships will be assessed by ASC ACT Branch’s organising committee, and announced during the branch’s AGM on 29 November 2021.

The branch committee is looking forward to reading your responses, as we look towards a bright 2022.

Terms and conditions can be found on page 2 of this document.

Thanks to Toss Gascoigne and Ian McDonald for providing this information.

Long hours, short-term contracts, uncertain employment, and cut-throat competition for grants, fellowships and positions. The work may be on interesting and important issues and the company stimulating, but for many the reality of a career in research isn’t so rosy.

This event was held yesterday – we look forward to hearing the reviews.

In 2012, the Department of Industry, Innovation, Science, Research and Tertiary Education commissioned the Australian Council of Learned Academies to investigate the career pathway for researchers in Australia.

Join our panel of experts as they discuss the pros and cons of getting a PhD, and explore a best practice approach to how the career pathway of researchers might be improved.

The 1203 researchers who participated in an online survey and focus group discussions say the best thing about a career in research is working on interesting and important issues, and working in a stimulating environment.

Respondents say that best thing about a career in research is working on interesting and important issues, and working in a stimulating environment.

They appreciate the PhD program, which supports students as they work through their training; they feel encouraged to take up post-doctoral appointments; and they value the mentoring provided formally or informally by their institutions or their workplace.

Questions regarding the adequacy of salaries and assistance available to women re-entering the workforce draw mixed responses, rather more negative than positive.

On the less positive side are job security, uncertainty of funding and workload.

Almost universally, respondents to the survey like their work but not the employment system in which they work. For many the reality is seen as a frustrating round of chasing grants and fellowships while trying to write papers and (for some) manage a heavy teaching load.

This event is proudly brought to you by Australian Science Communicators [external link] and Inspiring Australia – a national strategy for engagement with the sciences[external link].

On a brisk Wednesday evening in early August, Canberrans came to hear real forensic scientists discuss their careers and how they differ from Hollywood’s portrayal. The ASC Canberra event entitled CSI vs Real Forensic Science, was facilitated by Ben Lamont, the Vice President of the ACT Chapter of the Australian and New Zealand Forensic Science Society (ANZFSS) and Forensics Capability Development and Training Officer for the Australian Federal Police (AFP).

This one and a half hour seminar-style event was both interactive and entertaining. Ben set the scene, describing a mock crime and asking five of his AFP colleagues, who specialised in the areas of either: fingerprints, documents, chemical criminalistics, biology and firearms to run through how they would approach the scene and some of the issues they might be face with collecting evidence, particularly for outdoor crime scenes or attending multiple sites.

The audience of over 100 attendees, including ASC members, high school and university students and members of the science community and general public, packed the CSIRO Discovery Lecture Theatre and asked lots of thought-provoking questions.

So, can a crime really be solved within the time frame of an hour TV show? Definitely not according to our expert forensic scientists who talked about it taking up to weeks or months for certain types of evidentiary samples to be processed, analysed and then used as evidence in court. One question of particular interest to our audience was whether Australia is allowed access to the USA fingerprint database used to collect fingerprints from all travellers entering the USA. According to Melanie our fingerprint expert, Australia definitely does not have access to any of the USA databases. The question was asked a few times… it did make me wonder what our audience members were trying to hide!

So how was science communication linked in with this event? Well, forensic scientists probably have one of the most difficult and high pressure communication jobs in the world sometimes being summoned to court and having to give on-the-spot expert evidence in front of lawyers, jurors and judges. I personally couldn’t think of anything more nerve-racking. Also, like many science jobs out their, the speakers did talk about the difficulty of getting into this very popular industry, where in some cases, only 1 of every 30 forensic science graduates are able to get a job in Australia.

So we were very lucky to spend time with these scientists, considered the ‘rock stars’ of the science world, learning about the industry and how it differs from those exciting TV shows we can watch on a nightly basis.

The audience was thoroughly impressed with the professionalism and organisation of the event. The ACT branch committee was very happy with the support we drummed up for both science in general and for the Australian Science Communicators. For those of you who listen to Triple J’s “The Hack” program which airs nationally every afternoon at 5:30pm, this event will be featured on the program in the coming weeks.

The event would have not been possible without our co-organisers and sponsors, Inspiring Australia, CSIRO Discovery and of course, the ANZFSS. We look forward to continued collaboration in future events. 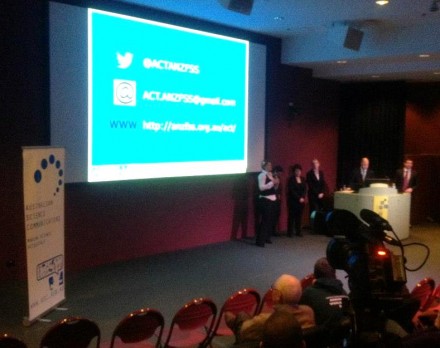 Interested in making science films? Come along tonight to join the network, swap tips and hear about some exciting new projects on the boil.

We’ll be checking out a selection of top Scinema entries and getting a sneak peek at footage from The Long Conversation, a science communication project shot in the communities of the Murray Darling Basin. There are 15 minute slots available if you’d like to present your ideas or work, so come along and pitch a film concept, show off your latest cut, ask for help and contacts or just sit back and listen in.
When: Friday 28th October, 4.30-6.00pm
Venue: ANU, Centre for the Public Awareness of Science, Physics Link Building 38A, Green Couch Room

Join Nick and Sarah for a tour of their house in Ainslie that is carbon neutral and draws no water from the mains. In 2007, they were the winners of the ACT Sustainable Cities Award, Residential Category.

See and hear about the solar heating, innovative biological greywater treatment system that treats all household waste water, and the first and only approved waterless composting toilet in residential Canberra.

Book by Derek  Wrigley: Making Your Home Sustainable: a guide to retrofitting

Join our panel of speakers to find out discuss research can better inform policy from the perspective of policy and practice, and the role of science communicators in this process.

Speakers include: Dr Lorrae van Kerkhoff, Visiting Fellow, ANU National Centre for Epidemiology and Population Health. Dr van Kerkhoff has research interests in the role of research in informing policy, particularly in low-income countries and fragile states, and in institutional arrangements that foster better integration between research and policy and practice, particularly in public health and sustainable development.

Mr Allen Kearns, Theme Leader for Sustainable Cities and Coasts in CSIRO’s Climate Adaptation Flagship. Mr Kearns is an environmental scientist with international experience and practical expertise in the social, economic and ecological consequences of urban and industrial developments.

Where: Conference Room, CSIRO Corporate – Limestone Ave, Canberra (next to the war memorial)

The event will be recorded and the audio file put on this website shortly after.

Want to come to grips with social networking  technology and learn how it will change your working life as a communicator?

Then come to the ASC National Conference to be held in Canberra from Sunday evening, 22 November till Wednesday 25 November 2009 where social networking will be a major overall theme. And you will be encouraged to jump in and get involved right at the start. As part of your registration, you will gain access to an on-line forum, to begin a discussion of the issues before the conference—and keep the ball rolling long after the conference is over.

But that’s not the only attraction. The conference will also include a one-day symposium entitled Hot Air: Communicating the science of climate change with the general public, as well as papers on the latest research in the field of science communication, plus material on the place of the arts in communicating science.

Of course, the main attraction will be meeting and talking with other communicators, and there will be plenty of opportunity to do so during the conference proper and at the associated social events.

Put the dates in your diary, and we’ll provide details of costs (less than $500 for ASC members), and a more detailed program soon.